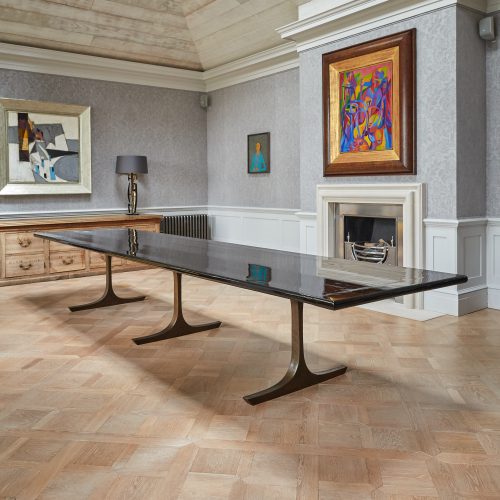 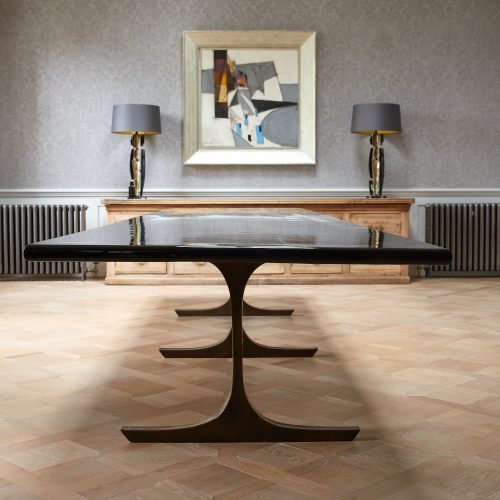 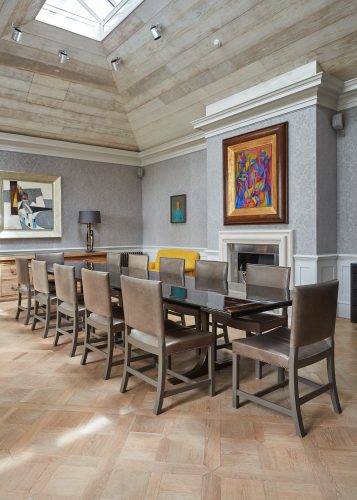 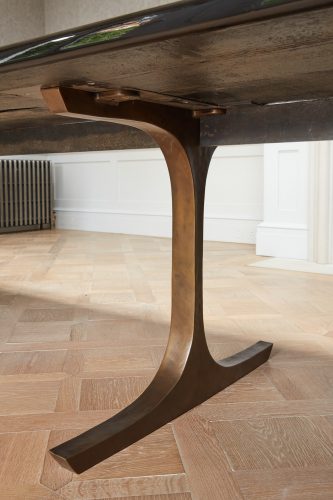 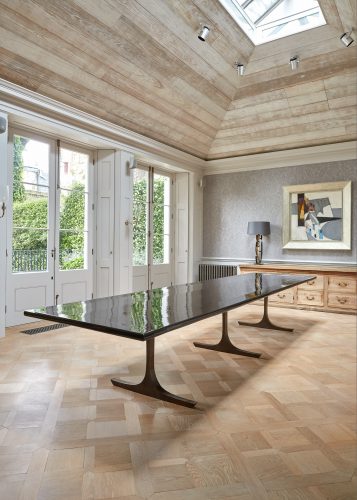 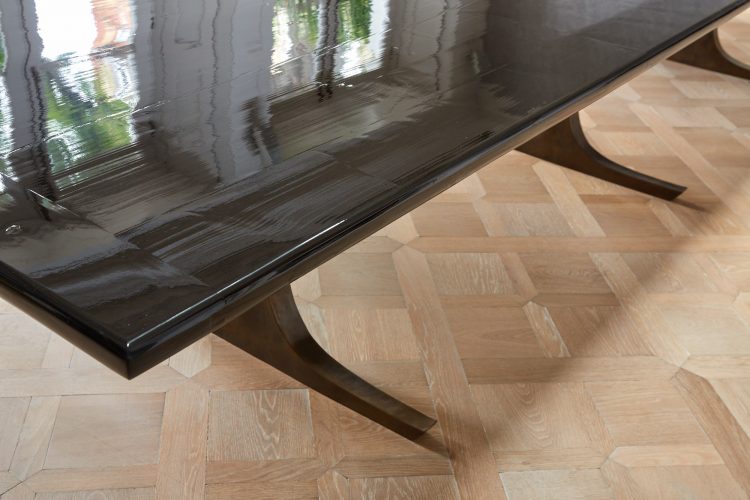 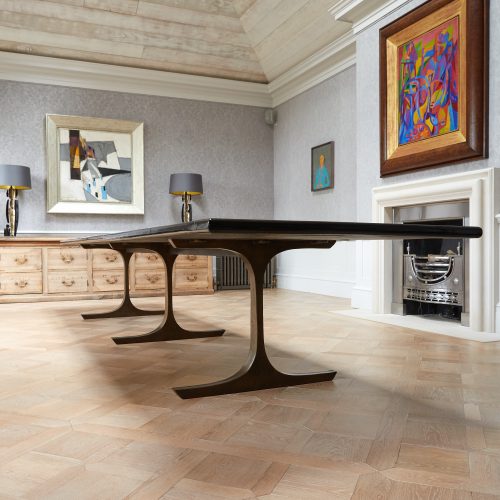 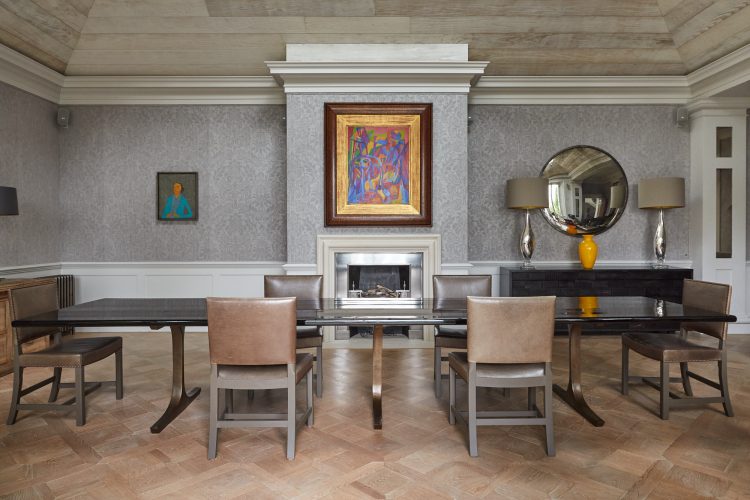 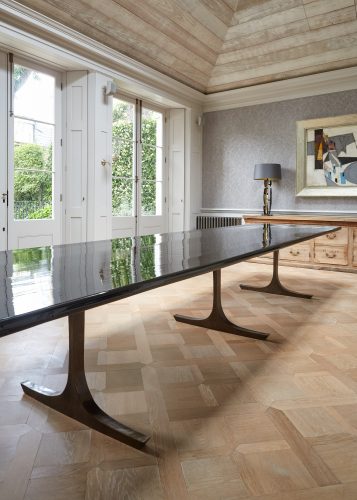 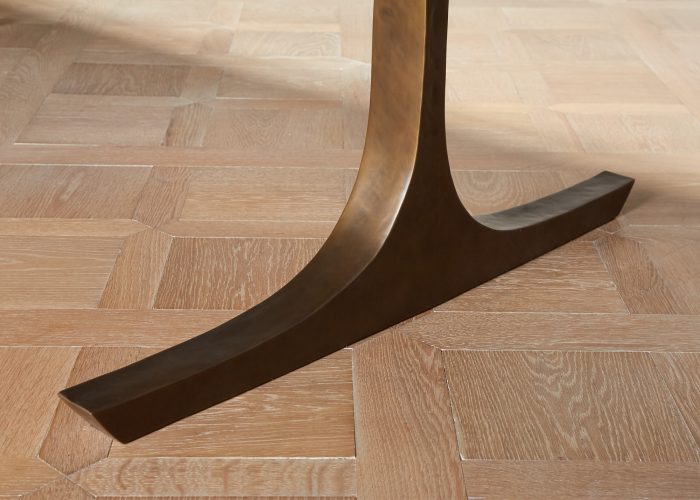 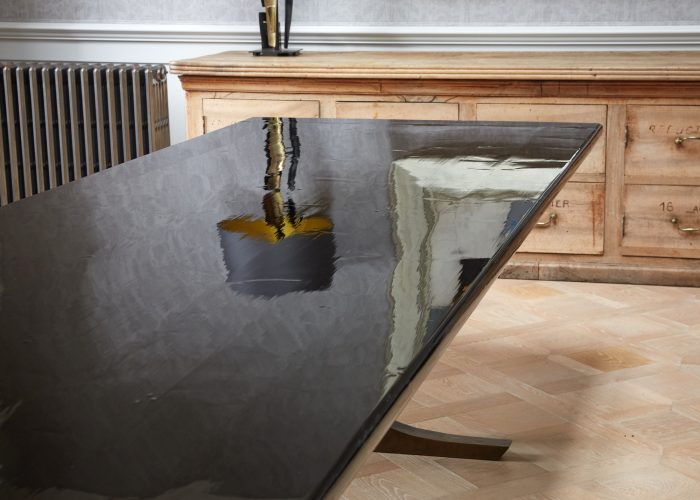 Available Now, a one off Made by Howe large black lacquered table on three anchor shaped Hudson Furniture Bronze legs.

This table was commissioned six years ago for a client with a wonderful house in Kensington. They dreamt of a black lacquered top with a metal base of some sort. The base they commissioned came from Hudson furniture In New York, cast in bronze and hand patinated in a Light Statuary Bronze finish. My advice was to make the top in exactly the way it would have been done in the 18th Century, retaining the inherent character of beautiful old lacquer, from the quality of colour and the way it fades, to the texture and the signs of shrinkage and wear. I felt, in order to do this we should go to Burma, the heartland of the process, where the skill is innate and a way of life, not a rare and guarded secret. Both myself and the client were taking a giant leap of faith since this was a process that I hadn’t attempted before. The top would be constructed by my furniture makers here in Norfolk using well aged reclaimed boards of a substantial width and thickness, having cleated ends with tongued and pegged joints for stability. My friend James Lowther of the Lacquer Company, in who’s expertise I placed my faith, agreed to the whole concept and arranged to ship the raw top, now crated and measuring 177″ by 43” all the way to his workshop in South East Asia. Over a period of three months the top was put through a process of traditional lacquering , so natural to the local workforce using native ingredients, washed with water from the local lake, involving a wrap of linen scrim and approximately 17 coats of black lacquer, each layer carefully dried in the local humid environment, sanded and smoothed between coats. Once polished and repacked, the top was flown back to London and fitted to the Hudson base composed of three anchor shaped legs attached via a rigid fine steel structure housed within the underside of the top.