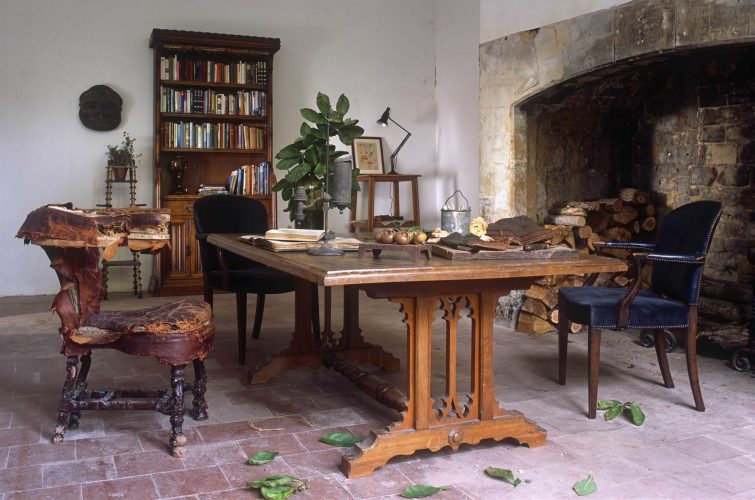 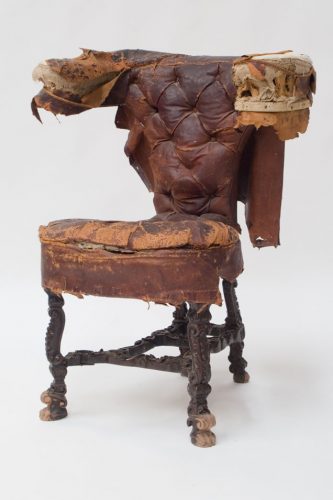 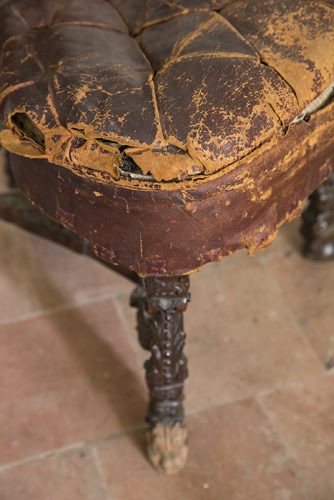 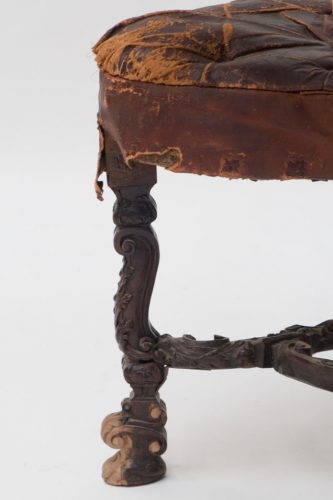 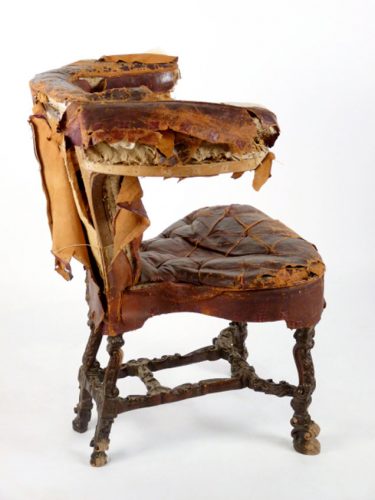 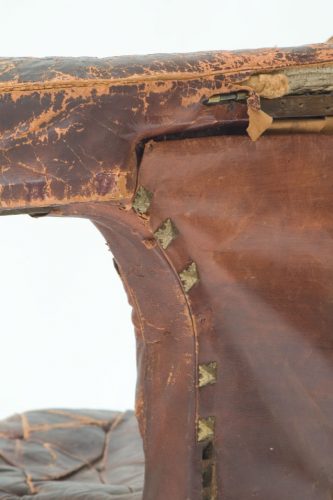 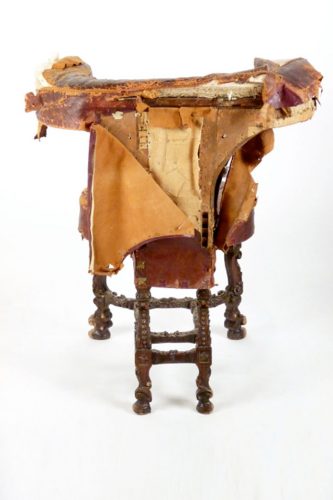 An C18th/Victorian carved walnut reading chair with a yoke-shaped top rail and ‘compass’ seat narrowed at the back, made to accommodate a sitter facing backwards, adapted in 1885 from an C18th reading chair. The back and seat are upholstered in deep-buttoned Victorian red leather, the outside-back cover space-nailed with large ‘jewel’ studs. On dark stained legs braced by stretchers, carved with c-scrolls and foliage and other ornament in late baroque style, on lions paw feet. The remains of the original drawer in the front of the seat is lined with three generations of marbled paper, the earliest of which appears to be C18th. Retaining the fittings for the original adjustable reading flap (since removed), including notches in the back stiles (to support the flap at varied heights) and hinges on the top rail. Inscribed in chalk on card panel behind outside-back upholstery, ‘P…[?] L…[?] | 1885 | 4/12’.

Reading chairs appear to have first come into use in the 1720’s and 1730’s, to judge by the style of several surviving examples, including two in the Victoria & Albert museum. But this may have been a fairly short-lived fashion, or such chairs may have been know by another name, for ‘reading chairs’ are rarely, if ever, mentioned in C18th bills or inventories. At the turn of the C19th however, Thomas Sheraton published an updated version of the type in his ‘Cabinet Dictionary’ (1803), plate 5. He described this as an ‘arm-chair for a library, or a reading chair’, noting that it was ‘intended to make the exercise of [reading] easy, and for the convenience of taking down a note or quotation from any subject. The reader places himself with his back to the front of the chair, and rests his arms on the top of the yoke’.

This chair was perhaps made originally around 1800, as it retains some structural upholstery of this period, with a square-stitched edge stuffed with grasses and horsehair. Alternatively the chair many have been made in the 1720’s or 30’s and reupholstered around 1800. Some 80 years later it was upholstered again, in the surviving deep-buttoned leather. At this point the chair was also transformed more radically, with new legs and stretchers, carved in the late 17th and early 18th century style associated with David Marot (a style now recognised as too early for the first reading chairs). This intriguing antiquarian restoration reflects the growing historic interest in ‘ancient’ furniture throughout the C19th. The chalk inscription presumably records the completion of this restoration and reupholstery on 12 April (or possibly 4 December) 1885.